Home › Faith › A Thanksgiving Story – A Pilgrim’s Hope and Loss

A Thanksgiving Story – A Pilgrim’s Hope and Loss

Thanksgiving is a time to be thankful but also an opportunity to share a story or two about the past. Here’s a Thanksgiving story you might have forgotten…or never knew. ♦ 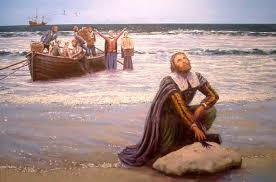 When the kids were teenagers and I would often search for a story or article to read at Thanksgiving dinner. I’d look for something to teach or motivate or remind them of others who persevered.

A story like the following and some others listed below:

The Pilgrims were Separatists from Scrooby, England, who refused to conform to the Church of England. They fled first to Holland and then to America, arriving at Cape Cod on the Mayflower in November 1620. In early December a group of men set out from the Mayflower in a small boat to search for a place to establish their colony. The cold winds and spray from the sea quickly iced their cloaks. They reached the shore that evening exhausted and cold, and spent the next few days setting up temporary shelters and exploring the area to find the best to settle. Early one morning they were attacked by Indians and narrowly escaped injury by huddling behind a makeshift barricade that shielded them from arrows.

Eager to leave that unwelcome spot, they sailed in their little boat down through the bay, but a terrible storm forced them to land on an island off the coast. They spent two days there, observing the Sabbath with a day of rest.

The next day, December 11, 1620, the explorers arose at dawn and set sail from the island across the harbor and made their first landing at Plymouth. Armed and on the watch for any possible Indian encounters, the men searched the land. They were pleased with what they found. There were many streams to provide water as well as several cornfields that had been cleared by earlier inhabitants. Since this was the best land the Pilgrims had found since their arrival a month earlier, they decided this would be the place to settle.

They were so anxious to bring the good news to those waiting for them on the Mayflower that they decided to sail the 25 miles to the tip of Cape Cod across the open water instead of hugging the coast as they had originally done. They made it safely back in the late afternoon.

The return of the exploration party came as a great relief to those who awaited them; the men had been gone for a full week, and many had given them up for lost.

William Bradford returned to the Mayflower anticipating the embrace of his young wife, Dorothy. As William climbed aboard the ship amidst the joyful reunions, his eyes met the sorrowful stares of the other Pilgrims. As he searched for the warm smile of his wife, he realized that something was dreadfully wrong. Out of the crowd of sullen faces stepped William Brewster, an old friend and father figure to Bradford. He grasped Bradford’s arm and gently pulled him aside. His word confirmed what Bradford now suspected: His wife was gone. She had fallen overboard and drowned before anyone could rescue her. She had been very depressed, and it is not unlikely that she took her own life.

Bradford was visibly shaken, and his loss might have sapped his will to see the new colony succeed. The man so many had leaned upon, was now the one needing support. Bradford’s friends gathered around him in his time of need, mourned with him, and helped him deal with the doubts and questions that enshrouded his wife’s death.

Within a year Bradford was elected governor of Plymouth Colony and served in that capacity for most of the years between 1621 and his death in 1657.*

Thanksgiving Inspiration
That first winter in 1620 was only the beginning for the Pilgrim settlers and the emerging nation that would become America over 150 years later. Things got much worse before they got better. For these God-seeking people, “Thanksgiving” as we know it today would only come after further heartbreak and blessings.

Here are some further Thanksgiving stories to stimulate thought and discussion:

Happy Thanksgiving
And so a Happy Thanksgiving to you. Enjoy a wonderful time with family, friends, and food. Of course, it’s also an opportunity for reflection, not only on things for which one is thankful, but also a deeper appreciation for man’s quest for peace and right relationship with others and God.