Lessons from Ahab and Jezebel

The Bible is replete with historical stories that can inspire us and instill wonder and even fear in a Higher-Power God that moves in the lives of real people, good and evil. This one particularly. ◊ 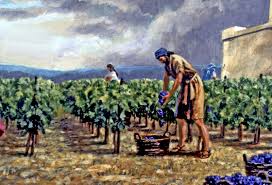 An innocent man with coveted property is targeted, tricked, and murdered by a notorious husband and wife team. The wicked husband, a political leader, repents of this egregious act and is spared from certain punishment by death. His power-hungry wife relishes in her evil accomplishment but ultimately faces the consequences of her actions.

Sounds like contemporary political intrigue or the plot line for a new movie or television series.

It’s actually a captivating Old Testament story that gives us insight into the wide range of human behavior and God’s response. In fact, there are numerous lessons we can extract from this one story alone.

It’s the story of the infamous King Ahab, his wife Jezebel, and an unfortunate man named Naboth.

The Motive and Crime. Ahab ruled over the Northern Kingdom of Israel in the latter 9th century BC. Naboth had a vineyard near King Ahab’s palace in the countryside outside his capital city of Samaria (1 Kings 21:2). Ahab wanted this vineyard so he could convert it into a vegetable garden. He offered to pay Naboth outright for it or exchange it for an upgraded plot of land.

Naboth refused. He was actually following God’s Law handed down from Moses to the Hebrews that an Israelite’s family inheritance should not be sold (Leviticus 25:23, Numbers 36:7).

King Ahab was not happy with this response and returned home “sullen and angry” that he could not have Naboth’s vineyard. He even refused to eat (1 Kings 21:4).

When Ahab’s wife, Queen Jezebel, learned the full reason for her husband’s unhappiness, she chastised him for his passivity and assured him that she would “get the vineyard of Naboth” (1 Kings 21:7). She conjured a deceitful plan involving forged letters from the king and the hiring of “two scoundrels” to falsely accuse Naboth of cursing both God and the king (1 Kings 21:8-12).

Based on these trumped up charges, Naboth was taken outside the city and stoned to death (1 Kings 21:13). When King Ahab heard that Naboth was dead, he went to the vineyard and now took possession of it (1 Kings 21:16).

Judgment and Repentance. Because of the murder of Naboth, God condemned both Jezebel and Ahab. The word of the Lord came to Elijah the prophet in a terse message which he delivered to King Ahab: “Have you not murdered a man and seized his property?…In the place where dogs licked up Naboth’s blood, dogs will lick up your own blood… I (God) will bring evil upon your household…and dogs shall devour Jezebel by the walls of this city (1 Kings 21:17-24).

After hearing God’s terrible pronouncement of judgment, Ahab repented before God for his actions toward Naboth (1 Kings 21:27). Because of Ahab’s humble response, God chose not to bring the promised disaster on Ahab during his lifetime but instead during “his son’s days” (1 Kings 21:29).

Aftermath. In fact, God’s word was fulfilled as Ahab was killed in battle with his own blood washed out of his chariot in the same place where Naboth had been stoned to death, just as Elijah had said (I Kings 22:34-38). As for Jezebel, she was later thrown out of a palace upper story window where her smashed body was eaten by dogs (2 Kings 9:30-37). Shortly following her death, Ahab’s 70 sons and their entire households were killed – “for the Lord has done what He said by His servant Elijah” (2 Kings 10:1-11)

Lessons Learned
Here are 7 object lessons that can be derived from this tragic story sown of idle greed, power, and evil.