Thankfulness comes out of giving, for both sides. We can actually learn how to give from a free and surrendered heart. Here’s a modern family Thanksgiving story of giving and receiving. ◊ 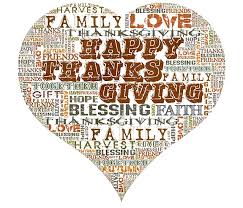 A man, at his wife’s urging, agreed to spend a few hours before Thanksgiving  handing out food packages and turkeys to others in need. The event was sponsored by volunteers through a local church. The man was actually not too excited when his wife told him she had signed them up. He was particularly distracted by a heavy workload prior to the long weekend break. Nevertheless they showed up at their allotted time to serve and be a blessing.

In fact, by the time they pulled into the church parking lot the couple’s hearts and minds were aligned in prayer and happy for the opportunity to engage with people who humbled themselves to come and receive this food offering. While the husband packaged bags of canned food and bread for people as they came through the line, his wife had the privilege of praying for people as they exited the building with their hands laden with all the fixings for a complete Thanksgiving dinner the next day.

As they drove home that afternoon the wife mentioned her encounter with one particular young man who came through the food receiving line and opened up with her during her brief time of prayer with him. She recalled that he was so grateful and asked also for prayer for his upcoming proposal to his sweetheart. He shared that he worked as a local maintenance man and was saving up to buy a ring.

His brief story stirred the woman in ways that would ripple over the years.

The Thanksgiving Challenge
The encounter prompted the woman to challenge her own family that Thanksgiving dinner. She placed 5 unmarked envelopes on the dinner table which each member of the family was to randomly select. Within 4 envelopes was a $50 bill. In one envelope was a $100 bill.

The challenge was for each person to take their $50 or $100 and pray specifically over the next month for whom or where they should give that money anytime up to Christmas day. Each family member would share their giving story over Christmas dinner. The emphasis was on praying for God to lead, nudge, and direct as God is want to do when we yield our agenda and surrender to His Will over our own.

It was the woman who ironically selected the $100 bill.

The family did pray over the next month and each member had a unique and special story to share over dinner that Christmas day. In some way, each family member was blessed to be a blessing with their gift. Why should anyone be surprised? As Jesus himself said:

“Give, and it will be given to you. A good measure, pressed down, shaken together and running over, will be poured into your lap. For with the measure you use, it will be measured to you.” (Luke 6:38)

As for the woman with the Thanksgiving Challenge idea, she felt strongly compelled to search out that young man she had met at that church turkey dinner distribution event. She said that the man’s face kept recurring to her in prayer. She only knew his first name. In an uncanny set of circumstances she eventually tracked him down and offered him her $100 toward the purchase of the engagement ring he was working so hard to buy.

Prayer and Multiplied Fruit
This happened over 10 years ago. Debbie, my wife, was the woman who signed us up to help distribute turkey dinners at that local church. I was the initially reluctant husband. Our 3 children were all blessed by my wife’s Thanksgiving Challenge that Holiday season. That young man who received the $100 bill did purchase the engagement ring and did propose and marry his sweetheart.

We never stopped praying for them. We all became friends and my wife and I mentored and coached the young couple pre-marriage and over the years through many highs and lows of their marriage relationship, even talking them down from a potential separation.

That couple now have 4 children. That young husband has learned to take the Godly headship role in his home seriously and his wife and beautiful young children are reaping the benefits. They are a blessed family.

Giving with Surrendered Expectations
I myself learned a lesson in giving that year. Beyond listening to the wisdom of my wife, I took a big step in giving with surrendered expectations. Giving in small seeds watered in prayer and directed by the leading and guidance of the God that supplies all that we or others would ever need in this life. His ways are beyond our own. We need simply to relinquish control, surrender in obedience, and seek outcomes that we can hardly consider.

In that we will be blessed to be a blessing to others.

What would you do with the Thanksgiving Challenge?
_________________________
Now He who supplies seed to the sower and bread for food will also supply and increase your store of seed and will enlarge the harvest of your righteousness. – 2 Corinthians 9:10

[Note: this story was originally published at BiblicalViewpoint.com as a post entitled A Thanksgiving Challenge, December 1, 2017.]