Who thinks and asks the timeless questions that beg for answers already given? We all do. ♦ 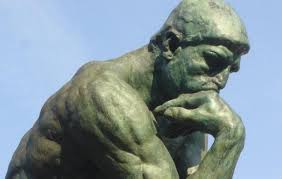 The Question:
I asked a Thinking Man if God was true. He said, “Yes.”

I said, “What do you mean?” He said, “The morning sun, the setting sun, the evening moon. The life teeming all around in vegetation, waters and skies. The people embodying life and blood. Their thoughts, the beauty, the stars. What more evidence do you need?”

I said, “Yes, but what is the purpose?

The Debate:
I said, “Apparently not much. What are you talking about?” He said, “All around us is evidence of a Power, a creative Power, who has displayed His magnificent depth and breadth and height and width. And Love. Yes, even Grace. Even Mercy. On a foolish man who doesn’t know. Who doesn’t see the obvious.”

I said, “What a minute. Please be clear. I want to know. What is this that you’re speaking of? If it’s God, it’s God, right? It’s God that you’re talking about. If that’s the case, then okay, I see the game you’re playing.”

He said, “I play no game. I’m telling you the truth.” I said, “Okay, I understand. Thank you. But, there’s a lot of people who are pretty smart and have looked at the things you’re talking about and have shown through science that there’s an explanation for all of this. A natural explanation. Not some mysterious supernatural God that’s in the Bible. That’s what you’re referring to, right?”

He asked, “What men are these that you speak of that seem to know about that of which I am speaking?” I said, “You know, scientists, philosophers. There’s been a lot of really smart people all through history that have looked at these things. And real true science to test and observe. And now we have technology and through technology we can see microscopic and atomic matters and out into space many, many miles with probes, you know.”

He said, “Really? Tell me more about what you know.” I said, “Look, I’m not a scientist. I just read a lot and I have a degree. And I’ve heard lectures and I’m fairly intelligent and astute. I’ve just read and heard a lot of things. I’d say enough to be skeptical, let’s put it that way.”

He said, “Okay. But these men that you speak of that are writing books and speaking on these topics, who are they?” I said, “Well, I don’t know them personally. Well, actually some I’ve met and some I’ve studied under. And I’ve read some of their books. Some are pretty well-known.”

He asked, “Oh, so those who write books and speak on these matters are held in high esteem? Who edits and publishes their books and academic articles? Who funds and hires these knowledgeable people? Who screens their opinions and airs their studies? Who manages departments and controls the message and the information viewpoints delivered in lecture halls, museums, television, magazines and news reports? What are the opinions of people at those levels who control much of what you read, hear, and apparently believe?

“Well, I think I see what you mean?” I said. “I would agree that much information is filtered. But how are we to know then truth that you say has ‘already been revealed?’ You’re talking about the Bible, right?”

“Yes, I’m speaking about the Bible,” he said. “Have you read the Bible?”

I said, “Well, it’s just confusing. I know it shows you about Jesus and God and heaven. And there’s the Old Testament and the New Testament. And that God loves us, and that Jesus died for our sins. I know all that.”

“You say you know it but it sounds like you don’t believe it,” he said.

I replied, “Well, I guess I just don’t relate to it. I really haven’t delved into the Bible much at all. If that makes me ignorant about religion and God and stuff, then guilty as charged.”

I said, “Well, I see your point. I guess I don’t really know what I know.

He smiled as he said, “It has been revealed to you already.” “Ah, there you go again!” I said. “What do you mean?”

He said, “In the rising and setting sun. In the life all around you. In your own flesh and blood and thriving mind. In your heart of hearts within you, you sense and know there is more. As I said, this has all been revealed to you.”

The Answer:
He said, “Know Who has revealed it to you. God. Come to this God. You can talk to Him. Ask Him. Tell Him you want to know Him. Do not listen to the foolish people around you no matter how much power and authority they have. This is not about them. This is about you. You. Even you can come to this God who is an authority worthy of your attention. More than the temporal authority of people who have power in this world. We’re speaking of Power beyond this world who creates the rising and setting sun, the form and breadth of precious life on earth like no one. No power is like this Power, this God. This Power should be sought by humans as the Authority beyond the power of humans who are but a creation of that Power. And in many cases these humans have rejected that Authority out of their own foolishness in quest of their own power and authority. Why listen to such people?”

He continued, “No. Seek and approach God yourself. Seek and approach this Jesus you say you know who died for your sins. And what do your sins have to do with this? This too has been revealed. Where? In the Bible. Where does one start? Start at the beginning. There it speaks of this creation, it speaks of the brokenness of the relationship between Creator and His Creation. You have been separated. You have been deceived. Understand what happened. Understand the Creator’s reach-out plan to restore the created paradise that has been lost. There in the Bible is a story told of God coming to restore, to interject Himself into rebellious mankind, to ultimately in perfection restore the promise of a perfect Creator. To recreate relationship with you so that you might know and have life. To be happy and understand your purpose.”

He said, “Disregard what people will say. Search with all your own heart and mind what is true and right and wise, even holy. Seek this relationship with this God who has revealed Himself in the morning sun, the setting sun, the seas, the land, the skies, the flesh and blood of your life and heart. Go. Now.”

This man to whom I spoke was me.

Are you a wise, thinking Man?
_________________________
Since what may be known about God is plain to them, because God has made it plain to them. For since the creation of the world God’s invisible qualities—his eternal power and divine nature—have been clearly seen, being understood from what has been made, so that people are without excuse. For although they knew God, they neither glorified him as God nor gave thanks to him, but their thinking became futile and their foolish hearts were darkened. Although they claimed to be wise, they became fools… – Romans 1:19-22